WhatFutures is a web application that was used to sign up for and manage a global future-forecasting engagement for the IFRC Solferino Academy. The game was designed to engage youth volunteers around the world using low-tech solutions. It was run almost entirely through WhatsApp, with help from the web app for sign-ups, leaderboards and behind the scenes administration. 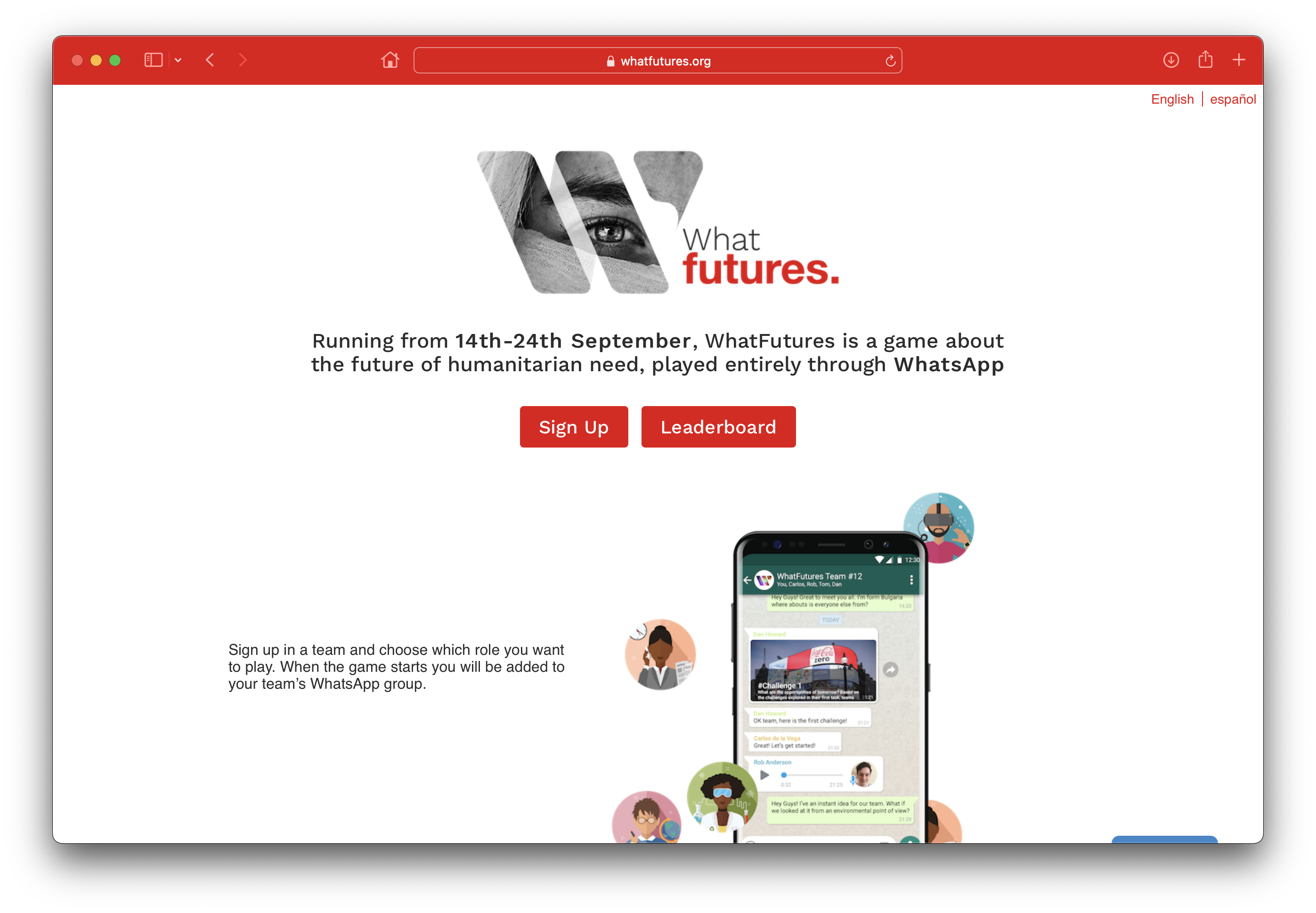 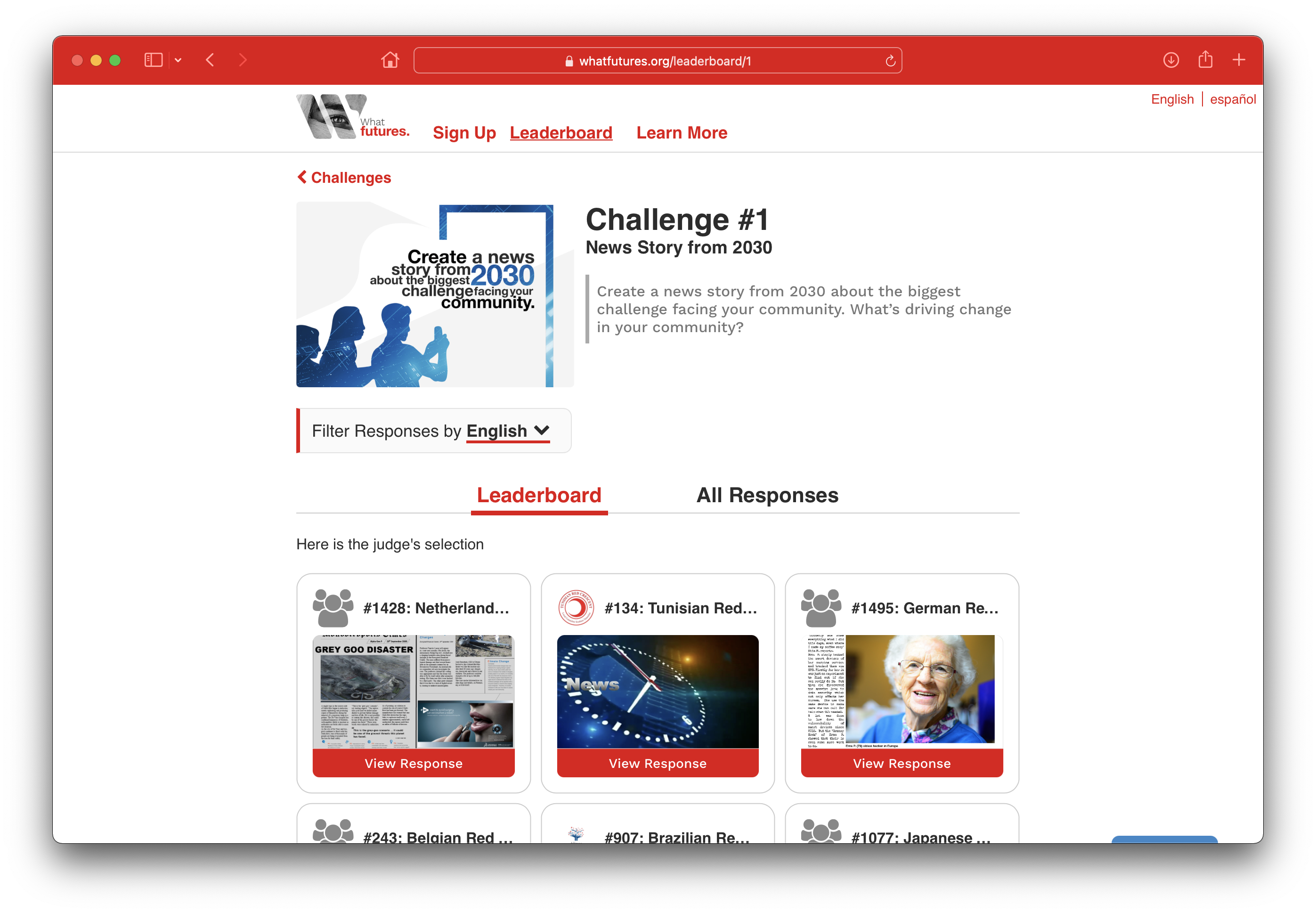 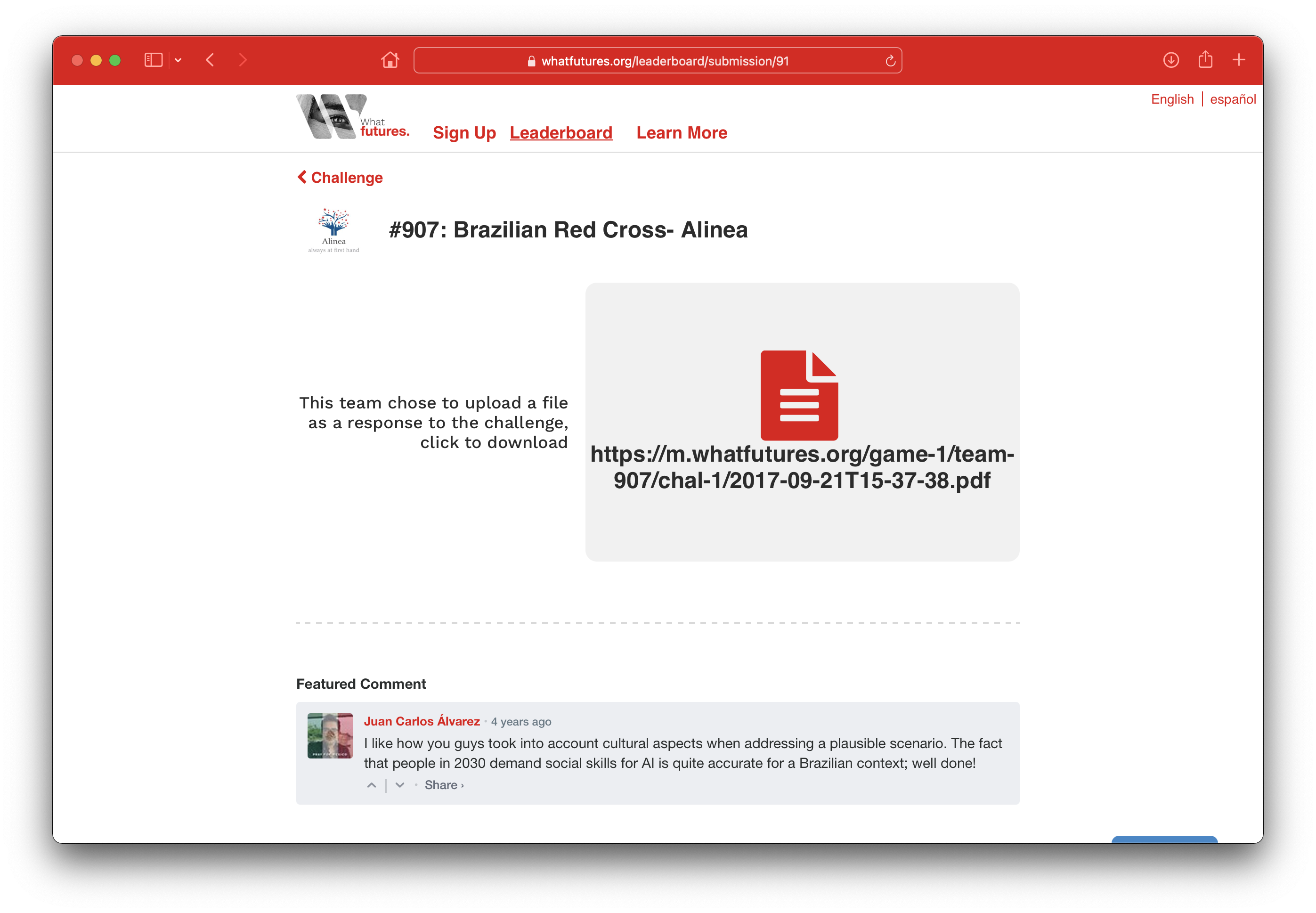 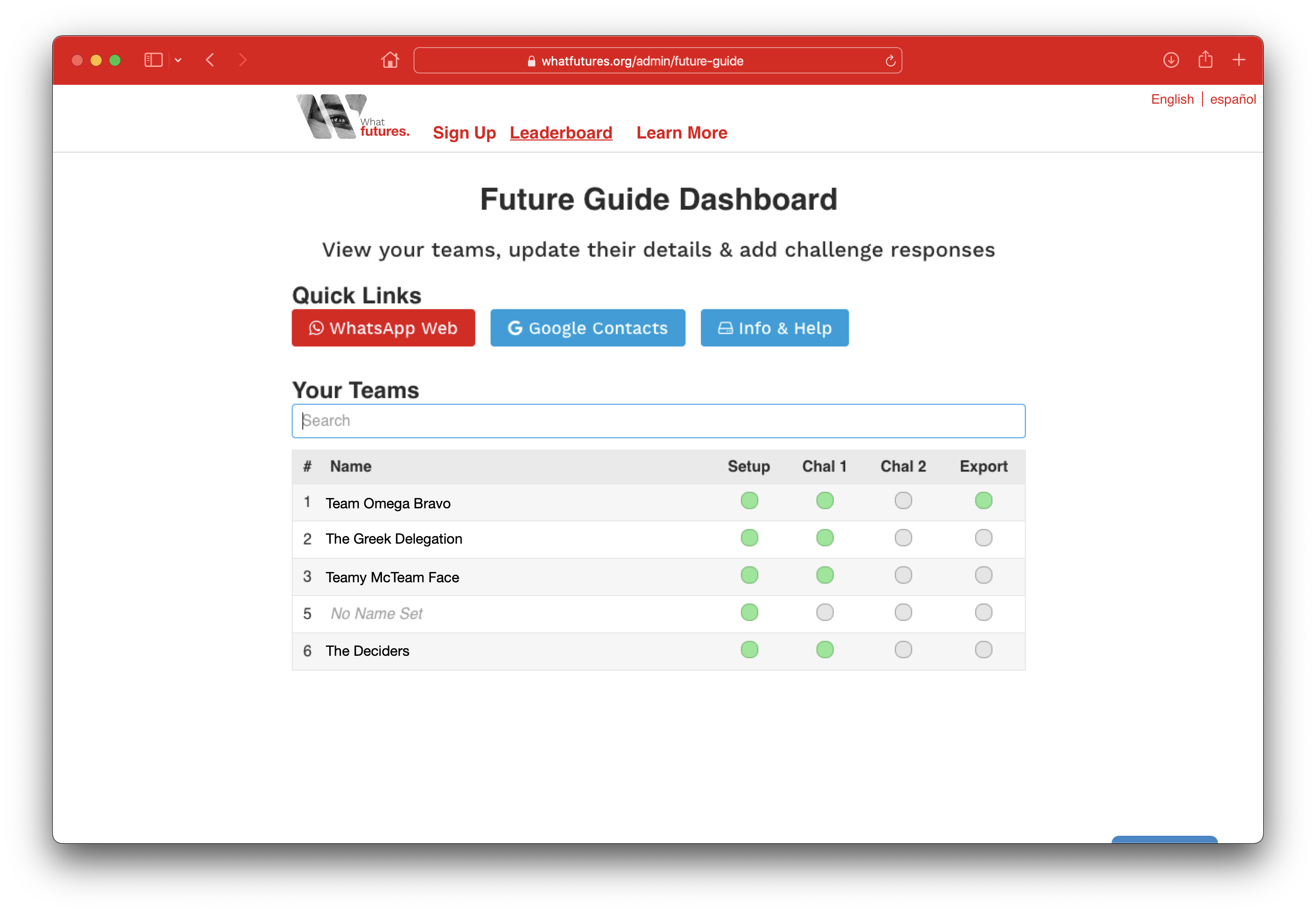 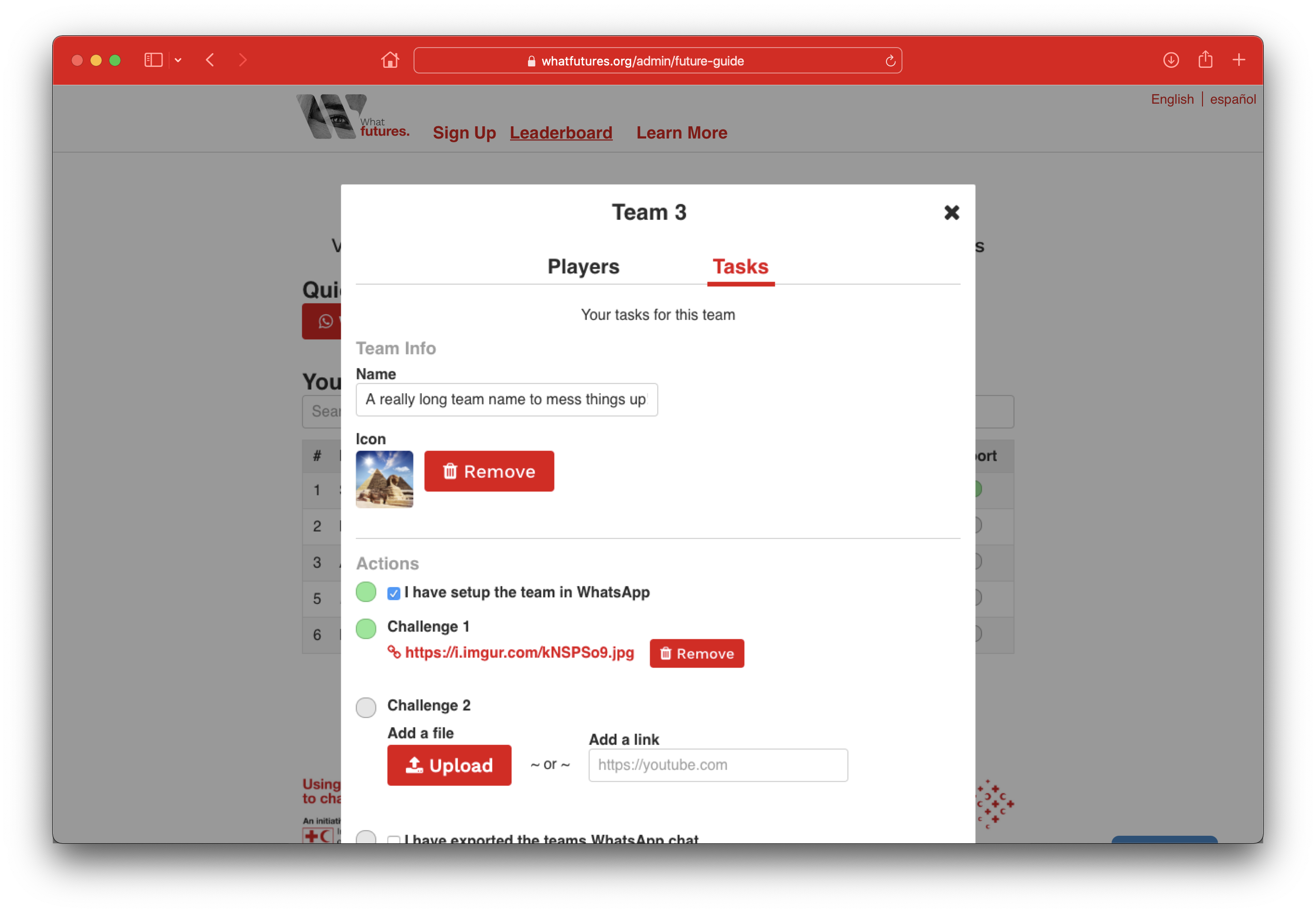 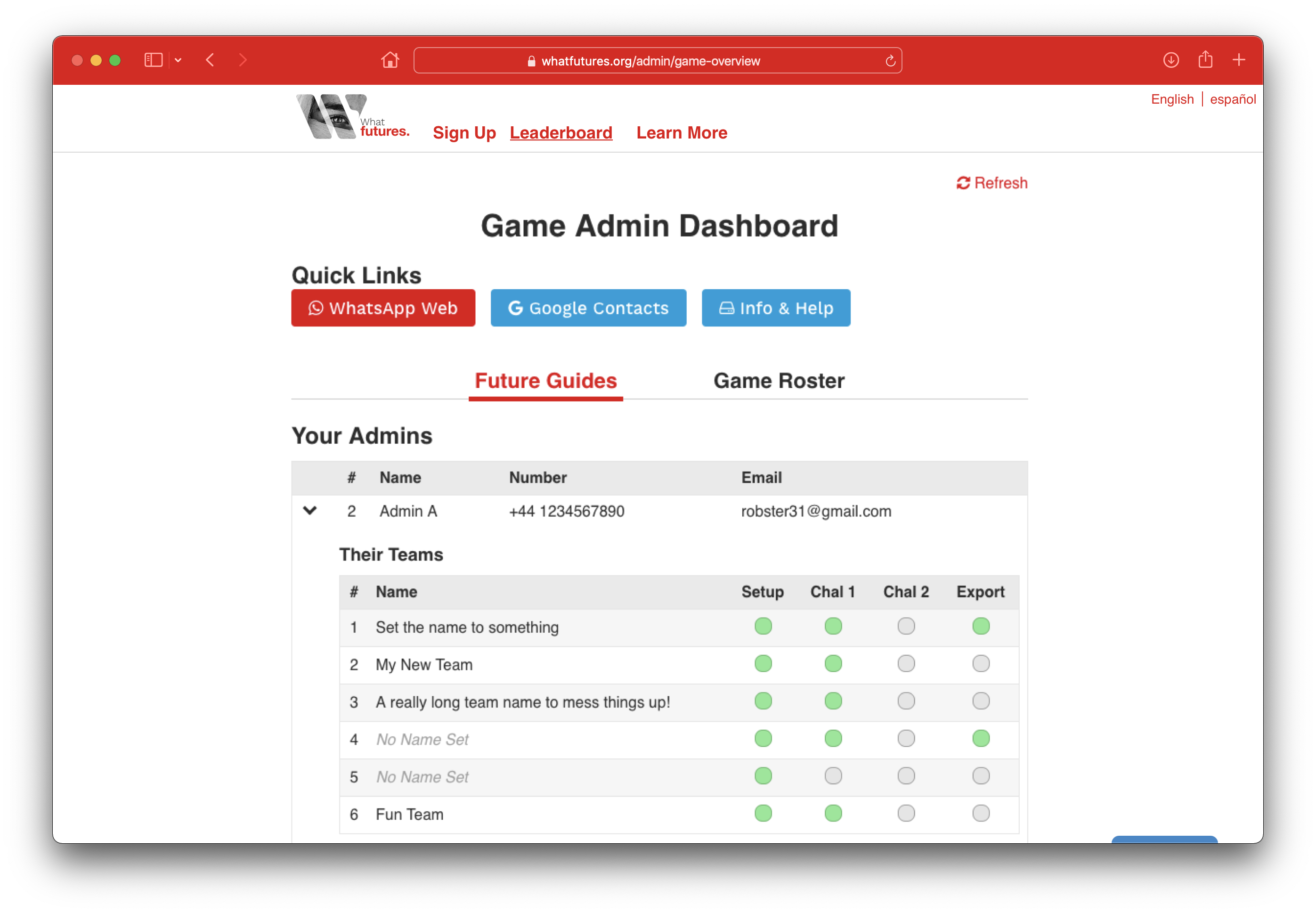 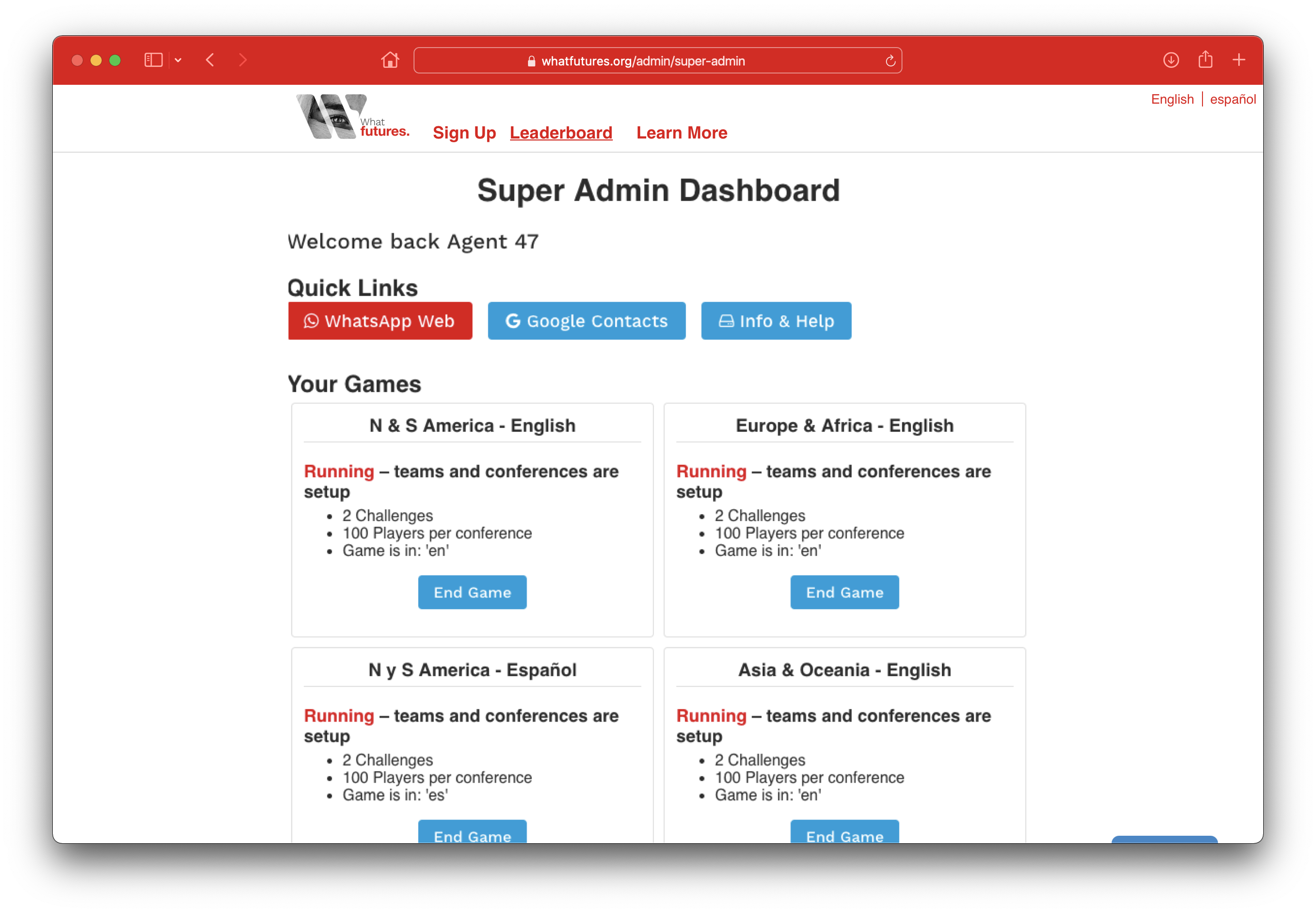 The front-facing part of web app let people sign up and create and join teams. There was novelty in the form where players chose a role that they would like to play as: Technologist, Environmental Scientist, Cultural Expert or Economist. Once signed up, players could then invite fellow volunteers into their team.

Roles were used during the engagement to create cross-cutting conference chats in WhatsApp. These created extra engagement around a topic to help teams work toward their responses.

There were three different dashboards for different people to manage different levels of the game.

The top-level dashboard let the overall super-admin view the different running games and advance their state. For example, moving a game from signup to running.

This dashboard was for someone is responsible for a game, there were game admin's per-region to align with local timezones. This dashboard let them see all the tasks to be completed and a portal to look up a specific player.

This ground-level dashboard was for Future Guide's, who were volunteers responsible for managing WhatsApp chats. At the time there was no public API for WhatsApp, so a human-powered approach was used instead. After a game went live, players were distributed between the Future Guide's, who were responsible for manually interacting with WhatsApp to create and manage those conversations.

This dashboard showed the tasks a Future Guide needed to do and helped guide them through their work, that included:

Players were encouraged to submit media files as responses to the challenges, like news articles or advertisements from the future. These responses were uploaded to the web app by Future Guides which made them visible to all. A Disqus embed was added to each submission for feedback, comments and likes.

Despite WhatsApp not having a public API to use, the WhatFutures web app still made use of several different APIs to make it work. The pilot initially used the Google Drive API to create structured folders for Future Guide's to upload the media responses into. The live game used AWS S3 instead so Future Guide could upload media through their dashboard and those files were pulled straight through when viewing a leaderboard.

To create a WhatsApp chat, you need to have the phone number in your contacts. To do this at scale, the Google Contacts API was used to automatically add phone numbers into a Future Guide's contacts.

The WhatFutures games were designed as state machines so that their transitions could easily be defined and tested. This enabled the Super Admins to easily advance the state of a game and relevant transitions would be performed, this included:

WhatsApp join links were sent to players via SMS using Twilio, to invite them to their team and to conferences. To avoid rate limits a queue used so that a maximum number of messages were sent per-minute. It was also used for ad-hoc messages, for instance sending a WhatsApp join link if a player wanted/needed to change teams.